What the frack are you all doing,

stomping through our field?

Shaking up the ground boys,

to extract what shale will yield.

But can’t you see we’re ripening,

until we’ve reached our best?

Sorry guys, the future’s ours,

there is no time to rest.

You’ve got to wait, the season’s here,

the farmer needs his crop.

Shut your mouth, behave yourselves!

There’s no way we will stop.

Pumpkins, squash and turnips too,

Times they change, that’s how it is,

the law is very clear.

for now at least, it’s true.

But Mother Nature will fight back,

and first, she’ll come for you.

money has turned your head.

Filthy lucre’s not all that.

Please excuse the poor formatting and whatnot – I am posting this using my phone, so goodness knows what it will look like! Suffice to say that this week’s dVerse Poetics prompt was too good to miss. The issue about which I feel strongly was also very close to my dad’s heart, and since I have spent a strangely enjoyable evening talking about him, it feels like the right thing to do. I don’t have my laptop with me (I am away from home), hence the phone post.

I hope you enjoy this – it was written very quickly, but the pumpkins were calling! I will come back and comment on others’ poems and tidy this up, next week.

What the frack are you all doing,

stomping through our field?

Shaking up the ground boys,

to extract what shale will yield.

But can’t you see…

I have no ticket to ride, no known destination.

The gentle jostling of the carrier and its faraway

Baby has a mouse in her mouth, but leave it.

She may need the protein.

memories of dreams and dreams of memories

pulse in concatenation with the tempo

of the great clickety clacking conveyor.

flash past on other lines, here and near, then gone.

Zhivago futilely bangs on the window

for Lara’s attention, then terminal separation.

We always thought her meek and mild

until the day that she went wild

and fell in love with an antique Greek,

or should I say a Greek antique?

She gave a moan and then a shriek

that echoed through the whole boutique

and without a pause

she clasped him to her ample bust,

moved not by piety I think but lust.

As a matter of fact he was scantily clad

and to tell the truth I think she was  glad. 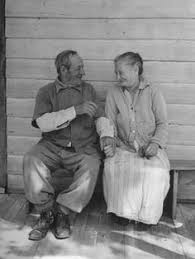 (My library group came up with all of these prompts:) delicious, horse, croissants, eviction, pardon

They decided to end it all—

This penny-pinching was no good

and so they headed for the mall

to see what their pocket money could

they hoped horse would be nutritious.

Their front stoop being their venue,

the landlord found them sitting there

looking quite satisfied, of course,

after they spent the rent on horse.

With the eviction delivered,

while her man gave a booming  belch,

which he was unable to squelch,

saying “Pardon,” but his sly grin

grew and then got away from him.

SIGH.fOR THE FIRST TIME THERE WAS A “magical widget,” and I had not the credentials or smarts to navigate the route apparently everybody else can. But I tried…

“Without you –
how vast
the cherry blossom grove”

My first halibun, and I had to look the word up on Wiki. Problem is, when I search

my mind and heart for a “you,” no one answers.  May be no one ever had that

experience.  The cherry trees are blossoming at this moment along the Hocking,

nearby, and I am a little sad, but it is night and cold and dark.  Maybe the sun will

rise as promised, and  I can be touched by beauty after all.

I know that the world is  still

Words can tell you

Embers dying in the grate.

So what can I say

when all is done?

Add a grain of salt

THE WORLD IS FLAT AFTER ALL

Dubbed Democracy, it used to be

top of the line, the lead ship, at sea,

and on the land it served us well,

until the  strains of its death knell

with all the pilfered things they stole

Gone is the half-belief in he

who’ll take us safely to the shore

while staying steadfast to the core.

The compass nestles in the deep

while those on board remain asleep.

They used to say the earth was round,

that all I knew I now know not,

nor how to tell the truth from rot,

and not so sure that we’ll endure,

to make a safe arrival.

Oh, write. But does

no, but there’s a

Alice has a Jabberwok.

seem to have one,

Does Alice have a

his blog. Or do you

but i THINK i have

Come jump into my arms, you furry-feathered verse!
I’ll know you when I see you, either wordy or terse.
Let your metaphor roll in like an occupying force;
sit up high in your saddle on your literary horse!
A shining black stallion, he snorts and passes by
leaving a desolated mule who gives a piteous sigh.
My metaphor has four legs and is not a happy guy.
He does not jump into my arms or even give a try
but nuzzles me as though to say,
“Thanks for waiting for me today.”

OUT TO GET ME

On the streets of New York

every woman wears a lasso at her side.

She struts her stuff and gives a wink–

or was an eyelash in her eye?

Her beauty lures me to her until I am

the captor, no longer her, and with

my marriage vows in shambles,

she escapes. There ought be a law.

(Idon’t know how to get my poem to you)

My comment would be:  When researching for my first book, I read “Men Who Rape,” by Nicholas Groth, and found that many men experience the attractiveness of women as an aggressive magnet used against them.

Everything and a few birds