lifelessons - a blog by Judy Dykstra-Brown

I have the need to be alone, to hide away, sequester,
but my roommate never leaves the room! She’s somewhat of a nester.
She seems to be ensconced here with her creepy boyfriend Lester,
and my irritation’s turned into a boil about to fester.
I may not make it to the end of the next semester
when I can find a roommate who is less of a rester.
She can be a talker or messy or a jester.
She can use my makeup, wear my clothes or gripe and pester.
In fact, I will take anyone short of a child molester,
so long as she’s a roamer—a gad-about, a quester!!!!

Must be good or you’d not lose

Image from Google via Vivian Zems “Smell the Coffee”

Art by Rob Goldstein. re-blog by me of a re-blog by kstreet607, The Fifth Column, from Gronda Morin 2016.

Occasionally I do water exercises and there’s a 7-year old boy learning to swim also in the pool with us.  The other day he swam up to me and touched my bulging belly and asked “what’s in there?”  I asked “what’s in your stomach?” And he said “food.”  That’s when it dawned on me that he had expected the word “a baby.”

Two on a Rant

Of course, if I could remember past yesterday, I might reconsider that statement.

This is a summation of what my short-term (and only) memory is telling me:

Either way, nothing is going in and what comes out isn’t quite right.

How’s work been going this week? (You might ask).  Here’s a clue

Unfortunately, I have a work ethic that’s on steroids

This has happened to me twice in the last…

Wow! I came close to losing it tonight. My helper was visiting and I thought it would be funny to have a photo of a crocodile among the several photos on my gravatar.  She helped me go ahead and make the crocodile my avatar so  (I thought)  whenever I had a particular kind of post I could use that one for my avatar.

Later, after that was completed, I happened to look at some of my comments and they ALL — back to the beginning of my blog about two years ago–had my picture as a crocodile!  In case you’re wondering, this was almost the  photo of me presented to the world with sweet blogs as well as raunchy ones:

So, in over reaction to

my close call, I’ve at least temporarily changed it to me, in pink, tra la!

That face you make when eating your first roasted brussels sprouts! OMG, I wanted to rinse my mouth out with bleach! THEY WERE HORRIBLE!

There’s a grocery store just down the street from my apartment. Around the corner from this grocery store there is a white, metal, glass-fronted box. It’s a few feet high and a few feet wide. It’s labeled “Dog Parker.” And as the cutesy instructive text explains, it’s an alternative to tying your dog’s leash to a pole while you step into a store. You just walk your dog in there! And then you download the app! And then you lock the dog inside! With the app!

I’d never seen it in use. But for months, every single time I walked by I’d slow my step, add a beat of delicious anticipation, and say a silent prayer: Please, Lord, let this be the day I see a dog trapped in a tiny pop-up prison.

After long hours of idle speculation, I finally read up. According to the the official origin story on DogParker.com, founder Chelsea Brownridge found inspiration for the start-up through her own dog, Winston, “a terrier mix rescue who lives with me in Brooklyn” and “is extremely high-energy” and “suffers from FOMO (Fear of Missing Out).” Too often, Brownridge continues, “Winston needed to stay home more than either of us wanted just because I’d go into a store for a few minutes where he wasn’t allowed. I hated that Winston and I were missing out on lots of extra walks and adventures together.”

As you won’t be surprised to hear, the official Dog Parker verbiage avoids terms common to incarceration. (Like “solitary confinement,” or “restrictive housing,” or “the hole,” or “the bing,” or “torture according to the UN Special Rapporteur on Torture.”) The company’s marketing refers to their product as “on demand neighborhood dog houses.” Very cute! One thing, though, I thought to myself as I read that: dog houses don’t lock you inside via app once you enter them.

It felt, fundamentally, like Dog Parker solved a problem that didn’t exist. That’s not all that notable — highly ambitious tech people seem to do stuff like that all the time. But what made this iteration of the tech trope so special, to me, is that this was the only one that had produced a prison for dogs.Admittedly, the world at large has been much more open to the idea. When TechCrunch wrote about Dog Parker last year, they called out the single-serving prison’s “internet connectivity” and noted how “through the app, users can view their dog on the web cam to make sure they’re OK” and how the boxes are also “fitted with a UVC sanitation light, which handles surface level cleaning of the Dog Parker between visits.” When Brooklyn Magazine explored it earlier this month, they asked some good, hard-hitting questions. Like: “What if other dogs pooped in there?” And “Is it okay to stuff my best friend in a box?” And “What if I can’t get him out?”

Please, Lord, let this be the day I see a dog trapped in a pop-up prison.

Still, ultimately, BKMag signed off, saluting Dog Parker for its expansion to 30 locations city-wide, and noting the company’s eyeing of 63 other “walkable” cities that may soon be able to take advantage of their temporary app-based jail services.

And now that I think about it — the other day, actually, I was walking into that grocery store down the street when a woman stopped me. She was just buying a couple of lemons, she explained, which she could easily grab from the crates out front, and she had her dog with her, and so she didn’t want to go inside. Would I mind handing the clerk a dollar for her, for the lemons? At this point I should have chucked a casual thumb behind my shoulder and said you know there’s actually a tiny dog prison right around the corner … What I did, like a complete idiot, was say sure.

Full disclosure: I don’t have a dog. You might say my credibility here, now, is shot. But I do know a lot of people who have dogs. They love to talk about their dogs. They do it all the time. One thing I’ve never heard any of them say is I wish there was a locker into which I could insert my dog while I ran errands.

But could I really judge without empirical evidence? So I asked the dog people. Have you tried Dog Parker? Would you? I heard a range of responses. Like: “lol I do not trust these AT ALL” and “I’ve seen them! They scare me!” and “[two hands-on-cheek-in-horror emoji faces].” I also heard, “I saw one in use and was happy to see that they dim the inside of the dog jail so the jailed dog doesn’t attract too much attention. You could argue that the dog jails are the least worst thing for a legitimate problem.”

I then asked two pals, a couple in Fort Greene with an adorable basset hound named Lou, to actually give a Parker a try. They were skeptical: I was told, “You will need to cover the cost of therapy Lou will need after the exercise.” But they went forth. And — Lou seemed totally fine afterward? But he’s a dog, so he can’t talk?

There was only one move I had left. One foolproof reporting tactic. It was time for me, personally, to enter the Dog Parker.

Here’s where I admit something else that might wipe out my credibility: I’m annoyingly claustrophobic. I only go in elevators if I can’t find a workaround. (Said workarounds might include climbing 20 stories or, like, avoiding the function altogether and returning home.) The Dog Parkers are basically my own private Room 101s.

Nonetheless, I marched forward. Last Sunday, on the way back from the store, I left my groceries on the street, downloaded the app, entered my info, and popped inside. I held the door shut (keeping my hand on the handle, of course, in case a panic attack ensued and I needed immediate escape). I took a minute to see the world from the point of view of a dog inside a Dog Parker.

It was cool — 60 degrees, according to the app. It was cozily lit. I didn’t feel like my air supply was going to run out, at least not imminently. I left and went home to think about what I’d experienced, and also to eat some bread. 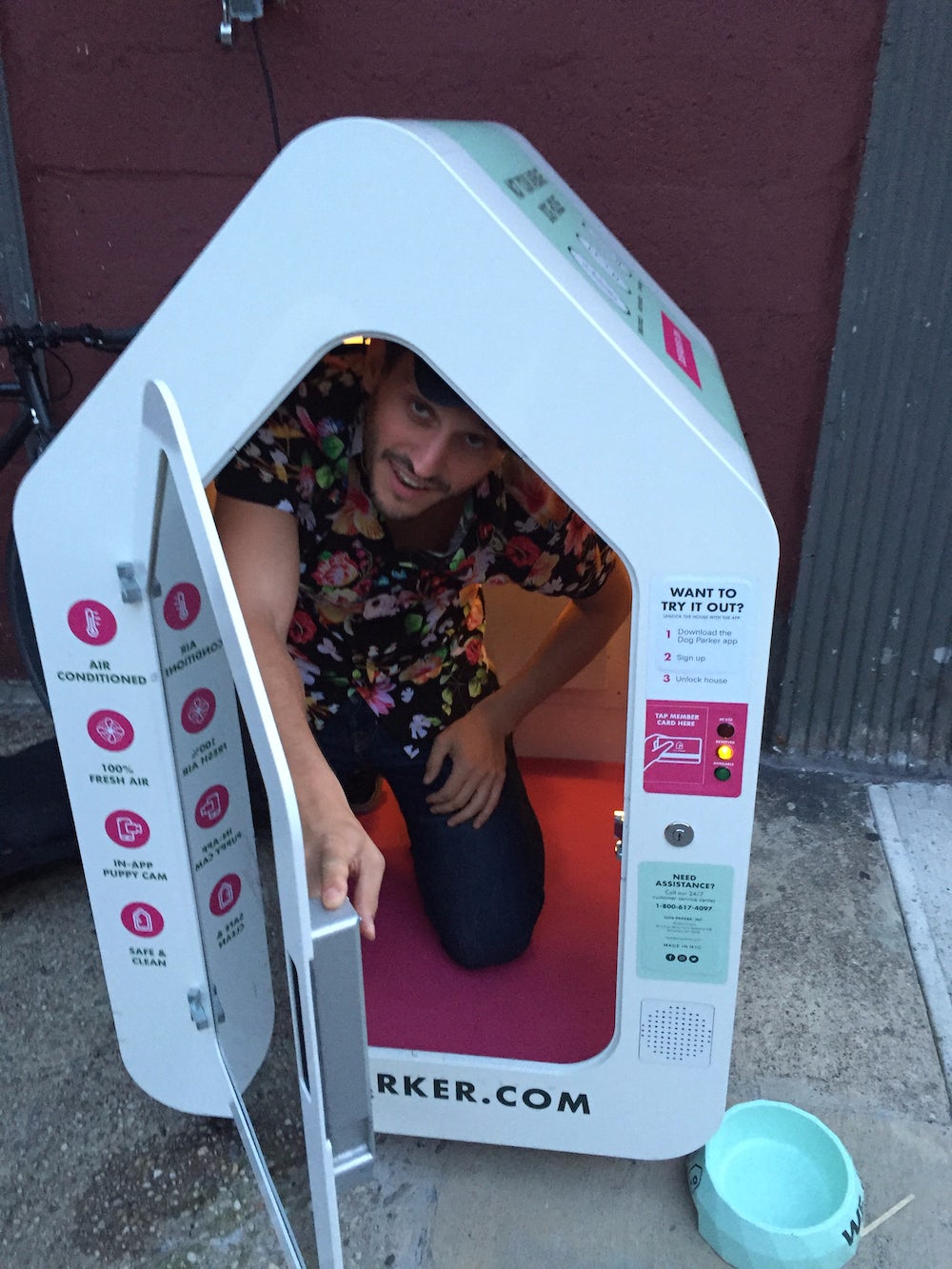 The author overcoming his claustrophobia to try out the Dog Parker. Amos Barshad

Then I noticed I had a voicemail. It was Chelsea Brownridge, the founder of Dog Parker, politely but firmly explaining that the Dog Parkers were designed for dogs, not humans, and that I’d violated the terms of service and that I should not climb inside of one again. The next day, we texted and I explained my motivations and my investigations. She said “we take pet care very seriously” and I agreed that was important, and also that it was probably dumb of me to go inside. She also asked me “How was your stay? :)” which I found thoughtful.

She agreed to answer some questions for this piece. And I emailed her really just the one pressing thought. Have you heard the criticism that Dog Parker can feel, from the outside, like a prison for dogs?

“We do hear them called that from time to time,” Brownridge wrote back, “but it’s always amazing to see how quickly people ‘get it’ and eat their words as soon as they actually give us a try. We’ve even had people see us at events and say ‘my dog wouldn’t like that’ and stand there with a look of shock on their face when their dog walks right in and sits down (they like the air conditioning).”

She sees Dog Parker as “the exact opposite of a prison,” she wrote, because it means you can bring your dog out with you anywhere you go (as long as it is near a Dog Parker).