is a beloved and reassuring

item that stands in for Mom 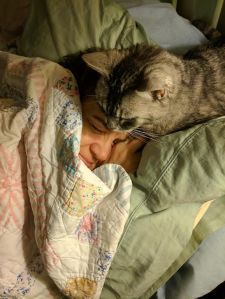 when she is out of sight.

A late bloomer, I still have

need for Mom, but my own

transitional  object is a book.

I tried to meditate tonight

but metaphors came to mock

the books which lined my shelf.

They made fun of the flying monk

who flew around the church wearing

no underpants and became a saint.

believe in the monk, as he is

described in Wilson’s The Occult.

At twelve my uncle gave me An

Experiment with Time by Dunne,

and how we dream of future events.

Hillman’s Dreams and the Underworld

scared me out of my Jungian analysis,

with hints of archetypes come to life.

Wilhelm Reich knew that his patient

had an abortion when she reported a

dream of a book standing upside down.

Strangers to Ourselves, The Whisperings

Within, and  Sam Harris’ Free Will all

assuaged my need for companionship.

and my heart, even though the friend

of a friend says he’s a misogynist.

Intellectuals alerted me to the fact that

Rousseau placed his five newborns in

baskets and left them, unnamed.

Discovery of the Unconscious tells of

a  fox who possessed a sick woman and

refused to leave without a fine meal.

I become anxious when’ere I discover

myself all alone and with no security

blanket to comfort myself.

Then I remember blogland.