That’s me. (I mean start writing without finishing it).  Bad habit. Do it all the time. Just came across this in my papers:   The author is a cat. 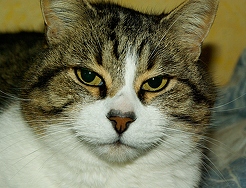 My adoptive parents took me in when I was only two weeks old.  My dear mother was struck by a car that didn’t stop, and she left me and my sister all alone in an abandoned barn. No one knew we were there, since Mom was a free spirit and didn’t put much trust in people.  Of course she was proved right, given what one did to her. My sister and I cried and cried. At two weeks old we couldn’t do much more, but finally I set out for the open door where what turned out to be birdsong lured me. You’ll have trouble believing what happened next: a big old tom cat heard me and picked me up in his mouth. I thought I was sure a goner, but he was just carrying me to his adoptive parents, who responded with a dropper full of warm milk.  Though temporarily safe, I couldn’t abandon my sister, so I tried to return to the almost empty barn. My attempts and cries resulted in the humans becoming curious and, exploring from whence I came,  with the tom cat’s help, they found my little sister, lonely and feeling twice abandoned, I guess.  Anyway, she got her share of warm milk and we were so exhausted and traumatized that we snoozed right off, without even looking over the family that we hoped would adopt us. There was discussion whether a 3-feline house made sense.  Two young humans begged for us to be adopted, and when we dozed off for several hours the matter had not been resolved. My reference to my sister as little is because, although I forget which order we were born in, she is literally littler than me.  Although I have affection for her, I was afraid they would adopt her and toss me out. As it turned out, it seemed the two young humans each wanted one of us, so I was spared the difficult choice of surviving versus being a loving big brother. You may wonder why my little sister doesn’t know English. She’s only a cat and always has been, pure cat down the line, whereas I have a tad of Old Joe in my genes.

2 comments on “Ever Start a Story You Didn’t Finish?”