(Still cleaning out my stuff). I  think the connection with Abode of My Dreams is serendipitious.

DOOTSY DORF AND WILLIE THE OCTOPUS

In the beautiful land of Oceanvale at the bottom of Seven Seas lay the spiral castle of Dootsy Dorf, the loveliest mermaid in the Water World.

Almost every day one might see the pretty mermaid going by in her conch carriage, pulled by two gallant and willing seahorses, So and Go.

Dootsy was princess of the kingdom and everyone loved her. She was kind to all her subjects and often sang light throaty songs for her fish folk as they went about, farming seaweed and searching sunken ships. 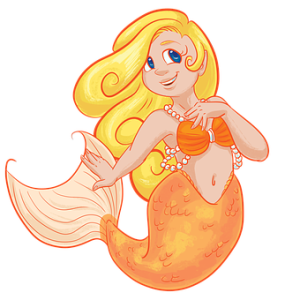 At night Zeebee, the self-appointed electric eel, presceded her carriage to light the waterways for her. Any of the gentlefish would gladly have given their fins for her.

The most envied fish folk, next to So, Go and Zeebee, were her private palace guards, made up of eight proud porpoises. These sturdy guards, surprisingly, were named after Santa Claus’ eight reindeer. They were dearly devoted to their princess and watched carefully that no harm came to her.

But in this beautiful world there was a great sadness. It lurked in a dark deep cavern near the palace. Sobs could often be heard coming from the black place and it seemed like the floor of Oceanvale was threatened with an earthquake when the sobs came.

Couples of angelfish, passing by, would sigh and look helplessly at the dark recess. Joe the Crab wold soon hear and scuttle into  the cavern. The sobs would stop almost immediately and the fish folk would sigh again and go on about their way.

For everyone knew about Willie the Octopus. Willie was very, very, very much in love with Dootsy Dorf. Also, he was very, very shy. Willie was a timid octopus and when any lady fish was around his many arms would tangle up and, in his embarrassment, he would fall on his head.

At first the lady fish laughed at these silly antics, but then they saw that he was sensitive  and easily hurt, so they quit laughing and only felt sorry for him.

Willie the Octopus had seen his princess only once, but that had been enough. Afterwards, fearing he would fall on his face again, he ran away whenever he spied her conch carriage coming his way.

The sad part of the whole matter was that while he loved Dootsy Dorf very much, he was too shy to ever let her know it.  And so he would cry and cry inside his dark cavern.

And Willie would never stop crying until his old friend, Joe the Crab, came siddling up to his side good naturedly and poking at him until Willie had to stop crying to giggle.

They were good friends. Willie had once saved Joe from death, when he was pinned under part of a sunken ship. The little crab had been unable to move, but Willie, using a few of his arms, freed him and the two of them became the very best of friends.

Joe always did all in his power for Willie, but it didn’t seem that he could help Willie as far as fair Dootsy Dorf was concerned.

However, he set out one bright day for the palace itself. No sooner had Joe the Crab started up the long path to the castle than he met the princess herself, coming along at a fast knot. Stepping politely aside, he gave her a claw in salute as she drove over the path.

Princess Dootsy Dorf was wearing a strand of pearls in her hair. “Hello there, friend Joe the Crab! I see you are heading for the palace. Did you want to see me?”

“I did, Princess Dootsy Dorf, but go on about what you were doing. I’ll come and see you when you have some more time,” insisted Joe.

“No such thing,” said Dootsy.  “I was just going out riding to see how my dear subjects are coming along. Come, Joe the Crab, sit here in the conch shell carriage by me.”

Joe advanced timidly to the carriage. Awkwardly he tucked his claws under him, so as not to take up too much room.

“Dootsy Dorf,” began Joe,  looking up at the fair mermaid, “I have come to see you on behalf of my best friend, Willie the Octopus.”

“Willie the Octopus? I have never seen him. Is he one of my subjects?” asked the princess.

“He hides from you, fair Dootsy Dorf,” said Joe.

“Hides from me!” The princess was puzzled. “But why? Has he done something bad?”

“Sweet mermaid, he loves you, ugly octopus that he is. But he is so shy and timid  and becomes too embarrassed when you are near. So he runs and hides when you come close and then sits in his cavern and cries and cries.”

Princess Dootsy Dorf clasped both hands to her breast and cried, “Oh! Oh! Poor Willie the Octopus!” And then she began to cry salt tears into the salt sea.

So and Go looked around unhappily at the weeping princess. They moved on at a slower pace.

“His cavern is over there,” Joe motioned to a nearby patch of darkness.

“Oh! Do stop, So and Go! Stop here by the lonely cave of Willie the Octopus,” cried Dootsy Dorf.”

“I’ll tell him you’re coming, princess,” said Joe the Crab, starting out of the conch carriage.

“No, Joe,” smiled Dootsy Dorf. “I’ll surprise him. I have a plan in mind,” and she gracefully stepped from the royal carriage. Slowly, she made her way for the dark recess.  Pitiful, heart-rending sobs came from within. Dootsy felt like crying herself, and was sorry she had unknowingly caused so much heartache.

The cavern was very black. It was so black, in fact, that even the lovely mermaid, who was used to seeing  well in darkened waters, could not see her hand before her face.

The sobs ceased at once.

A red glow could be seen in a corner of the cavern. Willie was blushing.

“It’s Dootsy Dorf, your princess,” Dootsy said gently. “And I’ve come to you for help. I just don’t know where else to turn.”

At this, Willie stood on the tips of his arms, at strict attention. “You need my help, fair Dootsy Dorf?” asked Willie the Octopus. “I am honored.”

“Oh yes, Willie. You don’t know how much you could help me. You see, strangers to Oceanvale, not suspecting a castle, often bump into my palace if they’re large, and if they’re small often swim right in through a window. Your job would be to stay near the castle and direct traffic with your many wonderful arms!”

“A royal traffic cop,” sighed Willie, “and all for you! Oh Princess Dootsy Dorf! What fun! May I start right now?” Willie danced around his cave. “Oh Fish! Oh Fish!” he cried happily, (instead of crying “oh boy! oh boy!”, like we do.)

And the three, looking on in surprise, saw that Willie no longer blushed. He was standing straight up, his long arms held rigid with pride,

And with that flying command, the conch shell chariot took off in a flurry, directed by happy William the Royal Traffic Cop. Joe the Crab, the real hero of the story, gave a snappy salute to his old friend.

4 comments on “Dootsy Dorf and Willie the Octopus: from 1955”