I have considered
my scars, not golden,
not joyful,
not thoughtful, but
silver pale, glistening,
secret lines,
hidden from view,
and wondering
if I can be beautiful
even though
I can never be
mended, not entirely.

I am broken,
re-made,
broken again,
mended. I am
burnt, cut,
poisoned,
damaged.
I am not
who I was,
and yet I am
still here,
beautiful
and flawed
and flawed
and beautiful.

How did you learn to write so exquisitely?

This November I went to Chicago with my daughter Vanessa to celebrate my son Gabriel’s 26th birthday along with his wife Christina, because we hadn’t been able to be together for it the last six years. September 11th had given me the strong compelling urge to see him,  be with him, to hug and kiss him again. Also, 10 months before I had had breast cancer and surgery. My chemotherapy and radiation were done and I was grateful to be alive. 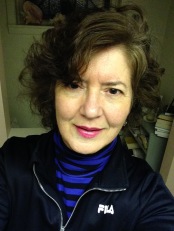 Gabe and I had had a fun outing in downtown Chicago one afternoon and were heading back to his home. The train was crowded so we had to find separate seats which disappointed me. However, I slid into a spot next to a young black boy of about 15 who was sound asleep with his head against the window.

It was a typical big city train ride with no one making eye contact or conversing. Even Gabe had closed his eyes to rest. There was a young black man in front of me sitting in a seat facing into the aisle, He appeared to be about 30, a man of style with his shoes of black, grey and maroon, his sweater with its Calvin Klein label on it and his shopping bag from Saks.  The train jostled us along , and after awhile, the young black boy next to me shifted, putting his head on my shoulder.

As unexpected as it was, I didn’t mind and smiled a little, not moving. Shortly after, the man in front of me glanced in our direction noticing that this bespectacled, middle-aged white woman with a maroon beret and a silk scarf around her neck had a young, curly headed black boy asleep on her shoulder. He leaned in towards me a bit and said, “You can sit on the other side of me if you want. I’ll move my bags.”

I shook my head and said, “It’s OK. I’m a mother.”  I was oddly touched by this accidental connection.

But suddenly I noticed that others had noticed us, too. There was an elderly black man down the aisle facing towards us who couldn’t take his eyes off us. Behind him was an elderly Asian man staring at us also. Others were looking too and finally Gabe woke up and lifted his eyebrows in note, saying nothing.

“All are one,” the Buddhist mantra came to my mind and suddenly I felt the truth of that state Thich Nhat Hanh calls interbeing. While I also felt special, as if I had been chosen to be there at this moment,  I was clearly only a part of it. Everyone else who was witnessing this strange little scene was a part of it too. And then there was the boy. Who was this child?

The young man in front of me took all this in as well and decided to address the young boy asleep on my shoulder. “Hey, bud, do you know whose mother you got your head on?” He laughed.

“I think he’s exhausted,” I said. He looked clean and neat to me but thin and tired–he may have been ill.

“You’re a good woman,” the man replied getting out a dollar and stuffing it into the boy’s jacket.” …”And I thought I had had it rough.”

“A good woman?” I questioned to myself, thinking, sometimes, but but certainly not always, like most everyone else I knew.  How about just lucky to be alive and lucky, through my own terrorist attack of  cancer, to have learned the sweet moments are to be cherished?  My voice was suddenly altered with a surge of emotion when I thought to say, “These are unusual times.”

“OK Mom, this is it,”  Gabe announced as all 6’3″ of him got up to reclaim his mother a full stop before we would’ve normally gotten off.

I gently patted the young boy on the head, saying, “Gotta go,” and got up to stand by the door. But before leaving I looked back and saw him still crumpled over in the direction I had sat and wondered again–who was this child–and hoped he’d be all right.

Then as I took Gabe’s right arm with my left and walked down the street, I realized that my whole right shoulder and arm still had that warm good feeling of that young boy’s body heat in it. This was the side I’d had my surgery on, the side that still had 11 metal clips under my arm and that easily ached and stiffened….but it felt great.

I smiled, realizing while I thought I had been helping someone else out, he too had been helping me and probably everyone else who chanced to notice as well. We were all in it together – interbeingly – on a packed train at the end of a busy day in he beautiful city of Chicago.

Used by courtesy of Ruth Reilly