President Donald Trump has not been shy about berating anyone who doesn’t “stand proudly” when the United States’ national anthem is playing at sports events. But a video posted on Instagram shows Trump moving around quite a bit when “The Star-Spangled Banner” was playing during the Super Bowl on Sunday.

The Miami Herald’s Sarah Blaskey notes that the video “shows Trump greeting guests, adjusting his chair, and straightening his suit jacket as other attendees — including First Lady Melania Trump and their teenage son — stand with their hands over their hearts. As ‘The Star Spangled Banner’ crescendos, Trump raises both of his hands in the air, and twirls them around as if conducting the music.” 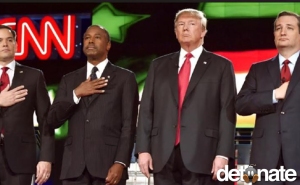 Blaskey notes that the brief video, which has also been posted on the Miami Herald’s website, was “included in an Instagram story by a real estate agent for a Russian-American firm who frequents Mar-a-Lago and other Trump properties and events.”

Trump has been especially critical of African-American football stars who have opted to “take a knee” during “The Star Spangled Banner” as a way of protesting racial injustice.  Above: Much earlier post of nonchalant Trump.