One of my pages (listed on my main page) is Serendipity and Sychronicity.  I’ve described two instances in my life and plan to add more.  But I hope you’ll feel free to add your own personal examples. (Page contains a long Wikipedia explanation of the two). You can post what you have to say as a Comment and I’ll add it to the S & S page, if WordPress allows me.

See my new page for a background to the terms above, I plan to report S snd/or S’s in posts. Here’s the first one which occurred about 1979 and involves my daughter Lili (sh

ort for Little Liz).  See her photo to the right.

It involves the I Ching, whch I am explaining via  Wikipedia– 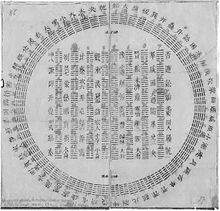 oviding inspiration to the worlds
of religion, psychoanalysis, business, literature, and art. Originally a divination manual in the Western Zhou period (1000–750 BC), over the course of the Warring States period and early imperial period (500–200 BC) it was transformed into a cosmological text with a series of philosophical commentaries known as the “Ten Wings.” After becoming part of the Five Classics in the 2nd century BC, the I Ching was the subject of scholarly commentary and the basis for divination practice for centuries across the Far East, and eventually took on an influential role in Western understanding of Eastern thought.

The I Ching uses a type of divination called cleromancy, which produces apparently random numbers. Four numbers, 6 to 9, are turned into a hexagram, which can then be looked up in the I Ching book, arranged in an order known as the King Wen sequence. The interpretation of the readings found in the I Ching is a matter of centuries of debate, and many commentators have used the book symbolically, often to provide guidance for moral decision making as informed by Taoism and Confucianism. The hexagrams themselves have often acquired cosmological significance and paralleled with many other traditional names for the processes of change such as yin and yang and Wu Xing.

One day about 1980 my daughter Lili showed some curiosity about the I Ching, whch I had been playing with.  I let her toss the coins and we were both surprised when it came out Lili/Lili.  Not to be distracted by so strange an occurrence, I had her toss the coins again. Again, they spelled out Lili/Lili, whereupon, somewhat shaken, we put the book away.

NEXT WEEK I’ll record another S/S, this one involving my youngest daughter.

Monkeys as Judges of Art, 1889. Retrieved from WikiArt.

I know 14 pages is way too much, but there’s another I want to have and so this is a time of decision-making.  I refuse to give up Incest or Dear Downs, tho people run from it like mad. Relief is pure pleasure, and Life Issues can handle so many important things!  There’s really some things I want to share and encourage on “Journal Your Way into Being,” and if I had the time I’d like to share mucho on the Dreams page (I’ve had experience with a public access show on dreams, led a dream group at a mental health center and prison, attended two annual meetings of the International Association for Dreams (at Charlottesville and Santa Fe), attended an ARE weekend workshop on dreams, and taught a creditless course on dreams at O.U.  But there’s no way I can tackle the possible meanings of anothers’ dreams.  (It’s too embarrassing and personally infringing).

I’m revising “Shattered Boundaries,” my novel and could post it as I go along, but I could just tuck that under ‘MY books.”  Let’s see, what is left? Our Shadow Selves–no, I won’t kill that one because sometimes I just use it to think and wonder and try to figure out our human nature.  I could let go of Poet/try as far as my poems are concerned, but I have a few (credited) poems I love by others included, and that leaves “Secrets,” which if anyone ever visited would be revealed as  a place to store new (to me) discoveries from science, so I can refer back to them. For instance, that the left side of the brain is more positive in outlook than the right? Revealed by experimentation.  But I’m 80 and I want to share more, especially about SERENDIPITY–yours and mine, to include not only “coincidences” but more from my life and how it is that an avowed current atheist can feel like she has a guardian angel? (Well, that could be my ISH)..

ANSWER: Start a new page.  Thanks, Blogland, for helping me decide.